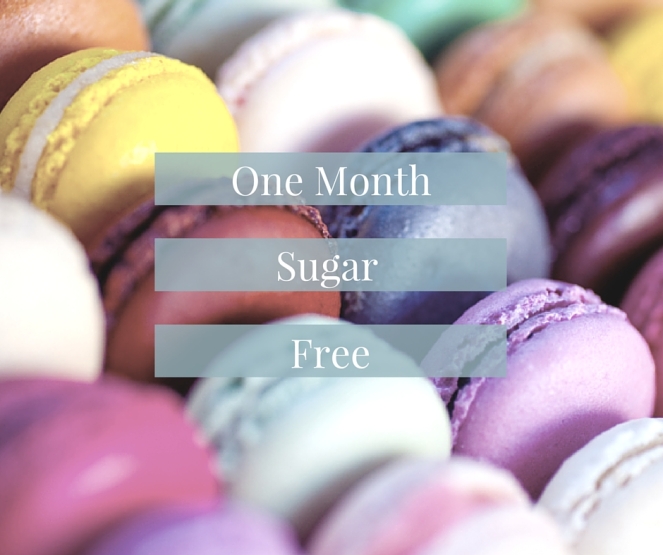 In April I decided to go refined sugar free. Thirty days of no chocolate, no alcohol, no sweets, no cake.

I’ve done stints of no alcohol (usually Dry January after the Christmas indulgence) but never everything all at once. I wasn’t sure how I’d find it, as snacking on chocolate had become an almost daily habit in my new office (tut tut) but after thirty days I couldn’t be happier. Here’s what I learnt during the month:

No sweet cravings as I expected, but carbs. Oh sweet carbs. During the first week all I thought about was pizza and pasta. Which was great as carbs weren’t off the menu! I planned meals through the week that gave me my ‘fix’ of healthy carbs and voila, all was well. My theory is that my body was so used to topping up on energy with nibbling on sweets that I needed the extra starchy boost to keep myself going.

I feel better and fuller with a bigger plate of food

Okay, that one sounds like I’ve been hit by the obvious stick, but it was surprising how I’d not noticed my workday lunches just weren’t big enough to get me through to dinner time, and how reliant I was on an afternoon pick me up. As I didn’t want to snack during the day I planned more protein heavy lunches that I could knock up in the work kitchen – by picking lean meat and a delicious bowl of greens the bowl I’d take back to my desk was huge, but still under 400 calories! I was fuller for longer and had no urge to start thinking about the things I couldn’t have.

Fruit was allowed during April, and I would say this is the biggest mental change I’e had during the month. After dinners, as Tim would chow down on some chocolate, I would have a small bowl of yoghurt and some fruit. If I wanted a snack in the day, out would come the bananas. And what I’ve found is that I would actively pick a bowl of fruit now over a bowl of chocolate. And I think that’s amazing.

My endurance for exercise went up

On a normal month I exercise quite a bit. I try to go to the gym four times a week with a mix of cardio and strength exercises. This month I went to the gym for high intensity cardio 22 out of 30 days, as I felt like I had the energy from all the great food I was eating. I also had no late nights for the whole month – no going out out – just nice early dinners! I’m certain this level of gymming isn’t sustainable but it was great to see that I could do it. I feel great and I’ve definitely kick started the ‘summer body plan.

I drove to evenings out with friends and family, or planned daytime activities so we could drink tea and chat. ‘Friday bar’ at work was a glass of orange juice. The main thing I noticed during April though was how difficult it seemed for others to accept me not drinking. I was asked ‘why!?’ a lot (just because/kick starting summer/personal choice) and thirty days seemed to be an eternity for some of the younger people at work. Perhaps it’s because it doesn’t feel like I big deal to me that I noticed when others looked shocked over giving up the sauce. The biggest win from this month was learning that I’m really comfortable being on a night out and not drinking. Or drinking just one if I feel like it. But not ‘having’ to get drunk just because everyone else is.

The biggest and best news – I’ve lost some inches. A little change (no sugar) led to a bigger change (increased exercise and more of the right foods) which of course ends up in an even bigger result (perkier bum, abs are coming through, stomach is leaner). In March I looked at myself in the mirror and thought ‘I would not be comfortable on the beach’ and now I am considering wearing my bikini to Sainsburys.

So there you have it. Thirty days to change habits I thought were ingrained. Or probably more accurately, thirty days to realise sugar doesn’t have the hold on me I thought it did.

Are you going to give the thirty day no sugar challenge a try?

I am looking for…

There was an error retrieving images from Instagram. An attempt will be remade in a few minutes.